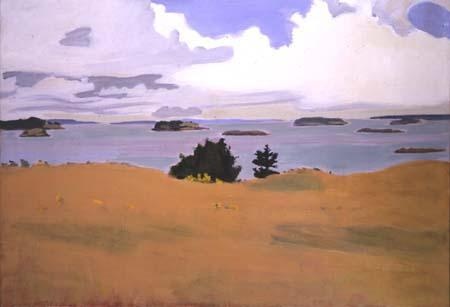 I’m currently on vacation on the coast of Maine, an area I’ve read a lot about — especially in relation to Fairfield Porter and James Schuyler — but never visited before.  In Camden yesterday, from the top of Mount Battie, I saw the whole sweep of Penobscot Bay and caught a glimpse of Great Spruce Head Island in the distance, the island owned by the Porter family, where Schuyler spent so many summers living with Fairfield and his wife and kids, and where Frank O’Hara, John Ashbery, and other poets came for extended visits.  You might say that Great Spruce Head Island is the northernmost outpost of the New York School.

If you’ve ever read Schuyler’s poems, or his letters, or his diary (all of which so vividly and extensively describe the look and feel of this part of Maine), or if you’ve enjoyed Porter’s luminous paintings or learned about the painter’s life (in Justin  Spring’s excellent biography) you may feel as if you have an intimate connection to this place, even if you’ve never been there.  It’s great to finally see this spectacular part of the country in person.

Judging from the guidebooks and the charming local bookstore, the poet most associated with this region is Edna St. Vincent Millay.  But for my money, this is James Schuyler country.

Here are some lines from Schuyler’s poem “Today”:

The bay today breaks
in ripples of applause.
The wind whistles.
Spruce and bright-leaved birch
at the edge
are flat yet plump
as letters with “see enclosures.”
A gull mews, the mailboat toots,
the wind rises and pours with a noise like water
and spills black jazz
from spiked brown seed cups of red columbine …

A sailboat scuds,
a poplar tugs at roots
in soil a scurf on rock.
Everything chuckles and creaks
sighs in satisfaction
reddens and ripens in tough gusts of coolness
and the sun smites