Jess, Robert Duncan, and their Circle — Painters and Poets in San Francisco (and New York) 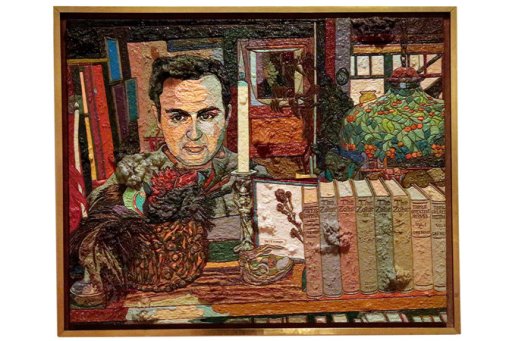 In New York, two recent shows have been devoted to the artist Jess — the partner of poet Robert Duncan — and their coterie.  The first, at NYU’s Grey Art Gallery, “The Opening of the Field: Jess, Robert Duncan, and Their Circle” will be on exhibit until March 22.  The second, “Looking Past Seeing Through,” at the Tibor de Nagy, ran from January 16 until today, February 22.

Both shows give one the opportunity to delve into a scene in which avant-garde painters and poets interacted and collaborated in fascinating ways — in this case, in postwar San Francisco, rather than in New York.  The two scenes, and the work which emerged from them, run parallel to one another and share compelling similarities and telling differences.

Despite these aesthetic, philosophical, and social differences — perhaps embodied in the vexed relationship between Robert Duncan and Frank O’Hara, who seemed to dislike one another with surprising intensity– the intoxicating mixture of collaboration, mutual inspiration, and radical experimentation one finds in the Jess-Duncan relationship and their broader milieu mirrors elements of the New York coterie.  And one can also find a sense of kinship and admiration between the two: for example, John Ashbery has long admired Jess’s wonderful, intricate collages and paintings, which he has collected and written about with great enthusiasm.

Holland Cotter recently gave the Jess show at the Grey Art Gallery a thorough and perceptive review in the New York Times:

“The show spans decades but focuses on the 1950s, when an assortment of offbeat artists and poets found a common link in their friendship with two gay men who lived as committed partners in a wonderland of an old house, filled to the roof with art.

One was the poet Robert Duncan (1919-1988), the other the artist Jess Collins (1923-2004), who went by the single name Jess. They met in the early ’50s and had a brief courtship. Jess went to a Duncan poetry reading; Duncan bought a little Jess painting. When they sat down to talk and discovered a mutual passion for mystical literature, Gertrude Stein and L. Frank Baum’s Oz books, they knew that their love was meant to be….

Despite their hermetic interests, Jess and Duncan were visible and influential cultural figures. Duncan, a natural mover and shaker, maintained a transcontinental network of literary contacts, which included Denise Levertov in New York, Charles Olson at Black Mountain College in North Carolina and Jack Spicer, a rivalrous frenemy in San Francisco.

… ‘An Opening of the Field’ — the title is borrowed from a Robert Duncan book — is a very gay show, in the sense of having many gay figures, who found an acceptance within this circle.”

Cotter admires the art presented in the show for being “so intensely personal, unabashedly spiritual and completely of a piece.”   This may, he notes, come “from the fact that so much of the art fits into no school, suits no market, lies outside the range of normal. It was an end in itself, a psychic collaboration, the communal property of lovers, spouses and friends.”

For more on the Jess shows, see also recent reviews in Artforum and Hyperallergic.

This entry was posted in Art Exhibit, Jess, Robert Duncan, Visual Art. Bookmark the permalink.
%d bloggers like this: