BBC on Frank O’Hara as a Poet of Our Moment 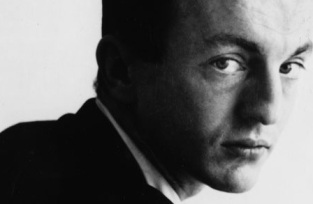 The recent surge of attention to Frank O’Hara and the 50th anniversary of Lunch Poems continues with a substantial BBC piece by Jane Ciabattari.  Don’t be scared off by the attention-grabbing headline — “Frank O’Hara: Poet of the Mad Men era”  — and photo of Don Draper reading Meditations in an Emergency.

This is, thank god, not another piece proclaiming that Mad Men rescued O’Hara from oblivion (we’ve had enough of those, thank you).  Unlike many other recent pieces, it even makes the obvious point that “O’Hara’s work has remained consistently popular with readers for six decades and has never been out of print.”

It’s an intelligent, informative piece, complete with good quotes from Brad Gooch, Robert Polito, Stephen Burt, and Adam Fitzgerald.  (Among other things, it passes along this exciting bit of information: Gooch’s biography of O’Hara, City Poet, “is now being developed as a film by producer Donald Rosenfeld”!).

O’Hara’s mystique, and the seductive power of his work, have lingered, and in recent years have grown even stronger. What distinguishes O’Hara’s poetry?  It is not just a remarkable grasp of the zeitgeist but the way his poems manage to feel contemporary, no matter what the year, the ways in which he broke new ground.

She quotes from Polito:

“When I was a young writer, O’Hara scared me,” says poet and scholar Robert Polito, president of the Poetry Foundation.  “A book like Lunch Poems made it all look so easy, when in fact the elegance, the precision, and the improvisatory sexiness of what he did has proved almost impossible for anyone else to capture, although many still struggle to imitate him. His ability to stay inside the moment of an experience, enthusiastic, surprised and surprising, is one of the qualities that make him so original. There’s also so much generosity there and empathy in the classic sense of his deeply imagining himself into the dynamics of other lives.”

… “Every great O’Hara poem creates a sort of eternal present,” says Polito. “Whenever you read those poems, the time is always now. That’s an astonishingly subtle effect. He operates at the absolute inverse of nostalgia – which is why it’s so funny that because of a show like Mad Men he’s sometimes associated with a sepia cartoon of the early 1960s. Don Draper might read Meditations in an Emergency, but I suspect O’Hara would have been slyly sardonic about the wistful, tip-of-the-old-fedora world Draper embodies.”

And Stephen Burt on what O’Hara means for poets today:

O’Hara’s influence on generations of younger poets has grown over the years, says poet and critic Stephen Burt. “He is turning out to be one of the most widely influential poets of his era – certainly canonical, someone whom poets admire and imitate, and someone whom casual fans, people who don’t read that many recent poets, also read.”

Why is that? “He’s fun!” says Burt. “He chronicled a life that at least looks attractive, and in language as agile as the social scene he depicted. He wrote well about love and friendship and even good sex – and he also wrote well about the loneliness and the weirdness and the frustration underneath even an apparently successful life.”

And Adam Fitgerald on why O’Hara’s poems still seem so vital, even prophetic of contemporary culture:

Why does O’Hara endure, inspire and remain fresh? “His work might read like it tumbled forth instantaneously and haphazardly, but that’s part of the effect, one of his greatest cons,” says poet Adam Fitzgerald, who will moderate the O’Hara festival. “Many of his poems have the immediacy of a consciousness formed by the internet: fragmentation, collage, name-dropping, checking in, quotations, gossip, scandal, click bait and trends, laconic witticisms and gushy, full-breasted rants. Call him a prophet of the internet. He continues on his poems because, in the face of all that noise and distraction which he loves and courts, he is so immensely vulnerable. And that sticks with people, on some human level.”

In a Frank O’Hara poem, Fitzgerald adds, “there’s a whole cityscape of being alive that thinks fast, acts fast, but lingers and broods, and knows ultimately there are few things in the world as intimate as hearing how another person looks dead at you, no one else, and talks.” O’Hara was not simply of his time, or ahead of his time. In the magical way of poets, he was both. He captured the essence of time.

This entry was posted in Frank O'Hara, Mad Men. Bookmark the permalink.