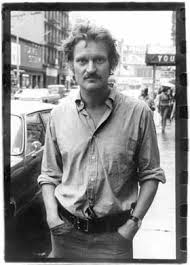 Today is John Ashbery’s 87th birthday.  I’ve been thinking of lines of his that might seem appropriate for this happy occasion, and some of my very favorite, the closing sentences of “The System” (1972) immediately came to mind:

“It seems truly impossible, but invariably at this point we are walking together along a street in some well-known city.  The allegory is ended, its coils absorbed into the past, and this afternoon is as wide as an ocean.  It is the time we have now, and all our wasted time sinks into the sea and is swallowed up without a trace.  The past is dust and ashes, and this incommensurably wide way leads to the pragmatic and kinetic future.”

In digging around for an Ashbery meditation on birthdays I came across the poem “Someone You Have Seen Before” (first published in April Galleons, 1987), which not only features some lines about a birthday — “their happiness is for you, it’s your birthday” — but also about change, time, and “wondering what the new round / Of impressions and salutations is going to leave in its wake / This time.”   Here’s the poem’s second half:

But people do change in life,
As well as in fiction. And what happens then? Is it because we think nobody’s
Listening that one day it comes, the urge to delete yourself,
“Take yourself out,” as they say? As though this could matter
Even to the concerned ones who crowd around,
Expressions of lightness and peace on their faces,
In which you play no part perhaps, but even so
Their happiness is for you, it’s your birthday, and even
When the balloons and fudge get tangled with extraneous
Good wishes from everywhere, it is, I believe, made to order
For your questioning stance and that impression
Left on the inside of your pleasure by some bivalve
With which you have been identified. Sure,
Nothing is ever perfect enough, but that’s part of how it fits
The mixed bag
Of leftover character traits that used to be part of you
Before the change was performed
And of all those acquaintances bursting with vigor and
Humor, as though they wanted to call you down
Into closeness, not for being close, or snug, or whatever,
But because they believe you were made to fit this unique
And valuable situation whose lid is rising, totally
Into the morning-glory-colored future. Remember, don’t throw away
The quadrant of unused situations just because they’re here:
They may not always be, and you haven’t finished looking
Through them all yet. So much that happens happens in small ways
That someone was going to get around to tabulate, and then never did,
Yet it all bespeaks freshness, clarity and an even motor drive
To coax us out of sleep and start us wondering what the new round
Of impressions and salutations is going to leave in its wake
This time. And the form, the precepts, are yours to dispose of as you will,
As the ocean makes grasses, and in doing so refurbishes a lighthouse
On a distant hill, or else lets the whole picture slip into foam.

The past is dust and ashes, this afternoon is wide as an ocean, and here’s to John Ashbery, and the “pragmatic and kinetic future”!