This week brought the very sad news that the artist Jane Freilicher has passed away at the age of 90.  Freilicher was, of course, a major, founding figure at the heart of the New York School, who was central to the movement and community from its very beginnings in the early 1950s right down to the present.

Some fine obituaries and appreciations have already appeared — in the New York Times and in ARTNews, among others — and I’m sure more are to come.

Freilicher’s importance to the poets and aesthetics of the New York School is too great and extensive to encapsulate in a blog post.  But I do want to note how often the word “muse” comes up in discussions of Freilicher and New York School poetry.  As David Lehman puts it in The Last Avant-Garde, “Freilicher was the poets’ muse of adoration … In a home movie that the librettist John Latouche made in 1952, Freilicher was given the power to walk on water — which pretty much sums up the regard in which the poets held her.”  In a piece last year in the New York Times about the exhibit “Jane Freilicher: Painter Among Poets,” Gina Bellafante discussed Freilicher’s “exalted status among the poets of the New York School … to whom she was muse, confidante, beloved brain.”

In a very useful recent essay on Freilicher, Jenni Quilter discusses the painter’s

remarkable presence in the circles of friendship and acquaintance that have been given the entirely too-formal name of the New York School. In the distinct coterie that formed around the Tibor de Nagy Gallery in the early  fifties — which drew in artists like Rivers, Grace Hartigan, Alfred Leslie, Robert Goodnough, Nell Blaine, and Fairfield Porter, along with the poets Frank O’Hara, James Schuyler, and Barbara Guest, in addition to Ashbery and Koch — Freilicher occupied a singular position, inspiring an unparalleled devotion among her friends, particularly the poets….Her letters were frequently passed around; as Ashbery noted, they were considered “required reading in my set.”

As Quilter points out, falling for Jane and her dry wit was something of a litmus test in their circle: “An appreciation of her tone even became a marker of taste: James Schuyler, Koch later recalled, ‘passed one test for being a poet of the New York School by almost instantly going crazy for Jane Freilicher and all her works.”

Freilicher’s reputation as muse took shape in the early 1950s, when Frank O’Hara began writing a series of poems to and about her.  These works have helped “Jane” take on an almost legendary glow for O’Hara aficianados.  He wrote over a dozen such “Jane” poems — including “Jane Awake,” “Chez Jane,” “Interior (With Jane),” “A Sonnet for Jane Freilicher,” and “Jane Bathing.”  As I’ve mentioned before, I’m particularly fond of “A Terrestrial Cuckoo,” which depicts Frank and Jane on an exciting, campy journey into the tropical wonderland of avant-garde art and friendship. (“What a hot day it is! For / Jane and me above the scorch / of sun on jungle waters”).

Another favorite — though one that is not often thought of as a “Jane” poem — is the piece O’Hara recited at a party given to celebrate Freilicher’s marriage to Joe Hazan in 1957, “Poem Read at Joan Mitchell’s.” In the poem, we see O’Hara working through a complicated set of mixed emotions about the impending nuptials of one of his closest friends.  (If anyone’s interested, an extended discussion of this poem can be found in my book, Beautiful Enemies, here). Here’s a passage from it:

This poem goes on too long because our friendship has been long, long
for this life and these times, long as art is long and un-
interruptable,

I hope there will be more
more drives to Bear Mountain and searches for hamburgers, more evenings
avoiding the latest Japanese movie …
more sunburns and more half-mile swims in which Joe beats me as Jane watches,
lotion-covered and sleepy, more arguments over
Faulkner’s inferiority to Tolstoy while sand gets into my
bathing trunks
let’s advance and change everything, but leave these little oases in
case the heart gets thirsty en route
and I should probably propose myself as a godfather if you have any
children, since I will probably earn more money some day
accidentally, and could teach him or her how to swim *

O’Hara wasn’t alone in writing extensively about or to Jane.  Ashbery has written repeatedly and beautifully over the years about Freilicher and her paintings, including in a 2005 piece, “Leave It to Jane,” which recently appeared in Poetry (“Her pictures always have an air of just coming into being, of tentativeness that is the lifeblood of art”). 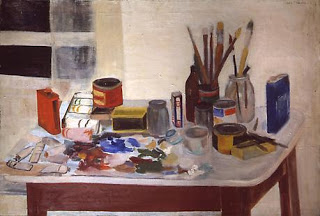 James Schuyler, too, was immediately taken with Jane as a person, a painter, and as a subject for his own work.  As Quilter notes, “Schuyler wrote a short play about her, Presenting  Jane, which John LaTouche filmed in the summer of 1952, when they all rented a cottage in East Hampton on Long Island.   The footage is now lost, but it apparently featured Freilicher walking on (or in) very shallow water.”  (Apparently, a copy of this film — which also features O’Hara and Ashbery alongside Freilicher — has recently been re-discovered and will be screened tomorrow night at a memorial tribute to Freilicher at the Poetry Project at St. Marks).

May drew in its breath and smelled June’s roses
when Jane put roses on the sill.  The sky,
in blue for elms, planted its lightest kiss,
the kind called a butterfly, on bricks fresh
from their kiln as the roses from their bush.
Summer went by in green, then two new leaves
stood on the avocado stem.  The sky
darkened the color of Jane’s eyes and snow
wrote her name in white.  Such wet snow, that stuck
to the underside of curled iron and stone.
Jane, among fresh lilacs in her room, watched
December, in brown with furs, turn on lights
until the city trembled like a tree
in which wind moves.  And it was all for her.

Just as her poet friends often wrote about her, Freilicher, in turn, frequently painted them:

As I mentioned above, tomorrow night (December 12, at 8), the Poetry Project at St. Marks in New York will be hosting an event titled “Presenting Jane: A Celebration.”  Originally scheduled to celebrate Freilicher’s 90th birthday, the event will go on as planned but now “as a celebration of her life and her extraordinary career as a painter and a ‘painter among poets.’

The event will feature quite a list of Freilicher’s friends and admirers:

It’s hard to lose yet another founding member of this amazing and influential collective of poets and artists.  As O’Hara asks in “Terrestrial Cuckoo”: “Oh, Jane, is there no more frontier?”

* As usual, I cannot get WordPress to allow me to render the poem’s spacing correctly, so this is not an accurate version of the poem’s layout.