Over the past few months, the 92nd St. Y has been hosting a “75 at 75” series, which asks authors to select and respond to a recording from the 92Y Poetry Center’s archive.  This week, my friend and colleague, the poet and critic David Kirby, reflects on a recording of a particularly wild reading given by Allen Ginsberg in 1973.

First, Kirby recalls meeting Ginsberg in the late 1960s when he was a young graduate student (and perhaps being not-so-subtly propositioned by the older poet) and two slightly later Ginsberg readings at Florida State University (where Kirby and I both teach in the English Department):

A few years later, he read again in Tallahassee—remember, poets were rock stars then. The FSU faculty consisted largely of older gentlemen who wore seersucker suits and taught from battered copies of The Norton Anthology. One of these old darlings was seated in the front row with his wife, and when Ginsberg opened with “Hard-On Blues”—“Blues is like a hard-on / Comes right in your mouth”—they got up and left; later someone told me he’d seen them weeping in the lobby, though that sounds suspiciously like an embellishment.

The reading Kirby chose from the 92nd St. Y’s enormous archive is a doozy — a messy, anarchic performance in which Ginsberg contends with continuous, belligerent heckling by his old friend Gregory Corso.  At about 5:30 minutes into the recording (below), Corso barges into the reading, assailing Ginsberg for peddling “poesy bullshit,” and bickering with Ginsberg’s father Louis, who apparently was also on stage.

Ginsberg’s reaction is characteristically generous and bemused, as he quickly incorporates Corso, and his interruption, into the reading.  He soon launches into some inspired, Dylan-ish singing, accompanied by a harmonium, in which he gleefully chants and rhymes and sings, all the while improvising and riffing on Corso’s behavior.  (You can find more about this strange reading and the Ginsberg-Corso contretemps here and here). 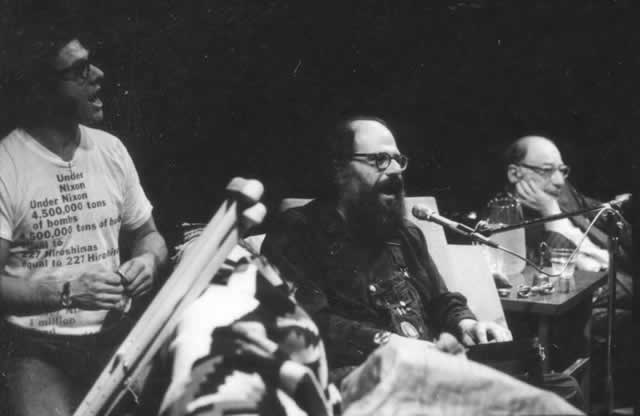 Corso, of course, was no stranger to heckling and bad behavior at poetry readings.  Almost 15 years earlier, in 1959, there was a notorious incident at a reading Corso gave with Frank O’Hara, which involved a drunken Jack Kerouac maliciously heckling O’Hara (an event I’ve written about here).  Although everyone remembers the Kerouac-O’Hara conflict — Kerouac: “You’re ruining American poetry, O’Hara”; O’Hara: “That’s more than you ever did for it” — Corso, too, was already honing the drunken poetry-reading harassment skills he would perfect at the 1973 Ginsberg reading.  As Brad Gooch tells it in his biography of O’Hara:

“After reading his last poem, ‘Marriage,’ Corso turned to O’Hara and said, ‘You see, you have it so easy because you’re a faggot.  Why don’t you get married?  You’d make a much better father than I would.’  Ginsberg then shouted from the audience, ‘Shut up and let him read.’  Corso replied, ‘And you’re a fucking faggot too, Allen Ginsberg.’ Willard Maas, an underground filmmaker, then joined in, ‘Why don’t you marry Frank, if you want to so much, Gregory?”

This February 26, 1973, reading at the 92nd Street Y’s Poetry Center, at which Ginsberg and his father were heckled by Gregory Corso, contains everything that I remember from the three readings I attended. Spontaneity, variety, improvisation, stupidity: in a word, show-biz. In that sense, the 1973 reading is an essay on poetry, period. Everything—everything!—flows into poetry and poetry is for everyone. You hear François Villon and Shakespeare and Blake and William Carlos Williams and the bards of Hindu scripture in Ginsberg’s lines, and you get the sense of poetry as a public act rather than a private process. Throughout, Ginsberg’s startlingly plummy tones are supported and refuted by his dad’s youse-guys Jerseyspeak and Corso’s drunken catcalls.

Gregory Corso is the ideal heckler: he’s drunk, you’re sober; he isn’t prepared, you are. Poems like to flow smoothly, but they also like elements that are indifferent and even hostile to that flow, and Corso’s outbursts are just such snags and sandbars in Ginsberg’s silvery current.

Kirby’s right — it’s quite an amazing recording and it does seem to capture something essential about the spirit of Ginsberg, and perhaps poetry itself: humor, play, improvisation, music, and joy.  He concludes: “I can’t imagine enjoying myself any more than I did this morning when I hit ‘play’ and rocked back and forth with joy as Ginsberg laughed at—and with—the world and everything in it.”