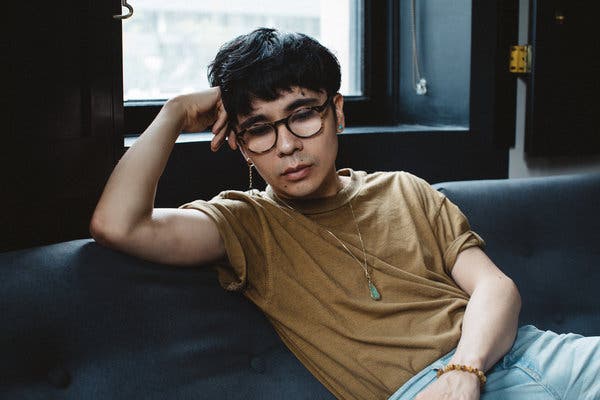 Given my own preoccupations, this note piqued my interest: in what way is Vuong’s poem written “after” O’Hara, and how is it also written “after” the contemporary African-American poet Roger Reeves too?  I dug around a bit, and found an interesting double-relay of sorts.

Apparently, Reeves recently published a poem entitled “Someday I’ll Love Roger Reeves” (which you can hear him reading here).  In some remarks Reeves gave at a reading, he prefaced this poem by noting:

It’s a poem that I kind of wrote to myself. It’s a love poem, again … Frank O’Hara is a guy I always turn to. He had this one line in his poem—I can’t find the poem again because you know Frank O’Hara has a lot of poems—and it’s a poem where he says “someday I’ll love Frank O’Hara.” I thought, that is the best thing to say in the middle of a poem—someday you’ll love yourself. So I said, I’m going to title a poem “Someday I’ll love Roger Reeves.”

The poem Reeves borrows this line from, which he mentions that he can’t recall the title of, is Frank O’Hara’s poem “Katy,” written in 1953.  O’Hara’s poem was written either about or with Katherine Porter, the young daughter of O’Hara’s friend, the painter Fairfield Porter.  In his biography of Porter, Justin Spring notes that this poem stemmed from a two-week summer vacation O’Hara took at the Porter’s home in Maine. “O’Hara’s charisma was such that the young Katie Porter, then six, doted on him.  The two wrote a poem together, entitled ‘Katy,’ which [James] Schuyler saved among his papers.”  Here’s the poem in its entirety:

They say I mope too much
but really I’m loudly dancing.
I eat paper.  It’s good for my bones.
I play the piano pedal.  I dance.
I am never quiet.  I mean silent.
Some day I’ll love Frank O’Hara.
I think I’ll be alone for a little while.

It’s interesting that in the O’Hara poem, the sentiment that “some day I’ll love Frank O’Hara” seems to be an amusing, sweet comment made by a little girl, not the poet himself.  So the line originally may have had less to do with the notion of learning to love and accept oneself than in these more recent poems which eloquently riff on O’Hara’s poem. That said, I can certainly see how O’Hara’s original line could resonate with such an idea.

So Ocean Vuong seems to have picked up the “someday I’ll love myself” trope from Roger Reeves, who in turn borrowed it from O’Hara (or Vuong may have been drawn to it simultaneously).  Perhaps Vuong’s poem is written after O’Hara in another way as well.  At one point in the poem, Vuong also writes “Ocean. Ocean / get up,” which calls to mind another, more famous O’Hara line: “oh Lana Turner we love you get up.”

It’s fascinating that the line “some day I’ll love Frank O’Hara,” drawn from a brief, not very well-known O’Hara poem, seems to have taken on a recent life of its own, resurfacing in powerful poems by younger contemporary poets grappling with questions of identity, race, sexuality, and self-acceptance.

You can read Vuong’s poem and hear an audio clip of him reading the poem here.