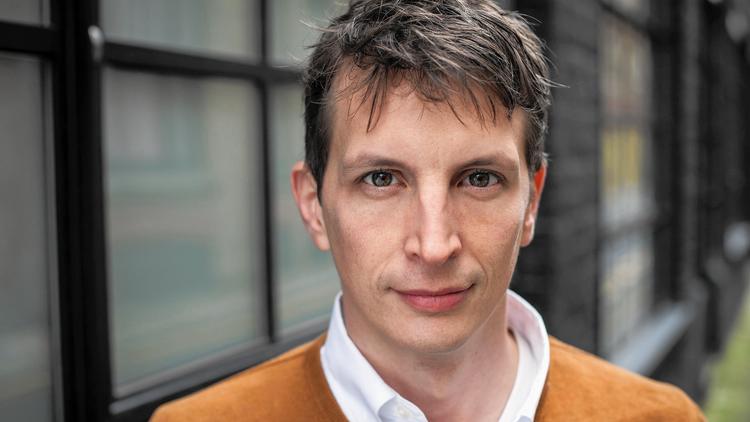 The literary world has been abuzz recently over the publication of City on Fire, Garth Risk Hallberg’s massive new novel about New York City in the 1970s.  The 36-year old Hallberg received a jaw-dropping $2 million advance for the book (his first novel!) and has been hailed as a “literary sensation” and author of “the most anticipated novel of the year.” With all that hype and expectation, it’s not a surprise that we’ve been inundated with feature stories, interviews, and now, a stream of high-profile reviews.

Much of the discussion surrounding the 900-page novel has focused on Hallberg’s connection to, and depiction, of New York City itself.  One intriguing detail that has come up repeatedly is Hallberg’s affection for the New York School of poets, and Frank O’Hara in particular, who he has cited as a source of his fascination with the city.

The son of a novelist and college professor father and a mother who taught high school English, Hallberg grew up in North Carolina.  By the time he was a teenager, he felt like a fish out of water in Greenville, NC — he recalls being “the resident beatnik of North Carolina,” devoted to the Beats, avant-garde poetry, Patti Smith, and punk.  Early on, he had aspirations to hit the New York streets and channel O’Hara:

“His first visit to New York inspired him to write a Frank O’Hara–style poem cycle. ‘I had one week in the fall of 1996,’ he says, ‘where I was like, “I’m America’s greatest living teenage poet.”‘ To natives, New York was becoming safe, denatured, but to the young writer and his friends, it still felt feral.”

In interviews, Hallberg acknowledges that reading the New York poets fostered his sense of the city as a romantic beacon and refuge:

“Thanks to the likes of Frank O’Hara and John Ashbery, New York took on mythic status. ‘That’s the place where the books are made, I thought. That’s also where Allen Ginsberg offered a friend of mine a Fig Newton outside a deli in the East Village. By the time I first came to New York, I was already half in love.'”

In another interview, Hallberg recalls his early immersion in the music of Patti Smith, Lou Reed, and the Velvet Underground and then adds “also I was a big reader of the Beats and the New York School poets. I always thought I was going to be a great poet, and go and live in New York, where the great poets lived — you know, where Whitman had walked the streets.”

It’s interesting to note that one of the biggest novels of the year — which has been hailed as a quintessential epic of Manhattan,  “a fresh vision of New York that is more dream­scape than reportage” — has its roots in Hallberg’s formative, life-changing exposure to O’Hara, Ashbery, Ginsberg, and the poetry of New York.