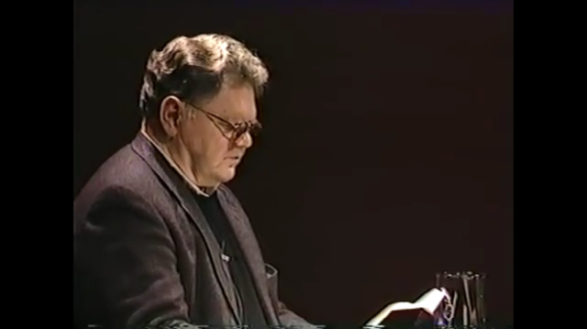 A rare video of James Schuyler reading his poems has just surfaced on YouTube, thanks to Raymond Foye, executor of Schuyler’s estate, who posted the video several days ago. [The YouTube clip has subsequently been taken down, but the video can still be found on the PennSound page for James Schuyler, here — scroll down to “Reading at the Dia Foundation”]. Since there is virtually no extant video footage of Schuyler that I know of, this would be a big deal no matter what, but the fact that it is a recording of this particular event — a now-legendary reading Schuyler gave at the Dia Art Foundation in New York in 1988 — makes it even more special and exciting.*

This reading is particularly famous because it was on November 15, 1988 that Schuyler, at 65, finally gave his first poetry reading.  Reclusive, plagued by intermittent bouts of severe mental illness, painfully shy, Schuyler had never before read his work in public, even though he’d been publishing since the 1950s.  That evening, Schuyler’s close friend John Ashbery gave a wonderful and incisive introduction (which can also be found in Ashbery’s Selected Prose), and throngs of Schuyler’s admirers from the literary and art world flocked to the Dia Center on Mercer Street.

As David Lehman describes it in his book The Last Avant-Garde, “For many in the audience it felt like a historic occasion.  The line of people waiting to get in, many poets, writers, and artists among them, snaked around the corner.”  The poet Charles North recalls that “The Dia reading was the most thrilling I think I’ve ever been to, the loudest applause I’ve ever heard – thunderous.”

An audio version of this reading has fortunately been available on the indispensable PennSound for some time, but it is rather extraordinary to suddenly have access to a video of the event and to see Schuyler and a younger John Ashbery in action.

The reading was a very big deal for Schuyler himself and his letters and diaries record the anxious build-up and the exhilarated aftermath of his debut performance.  He told friends about the practice “warm-up” readings he had been giving at friends’ homes, and reported his discovery of a “wonderful beta blocker pill called Inderal. It’s counter-stage fright, and stops the blood from getting that fizzy feeling and the other accelerations … Now if the Inderal will just get me through that evening in that intimidatingly vast space on (155) Mercer Street!”

A week after the reading, Schuyler reflected in his diary about recently turning 65 and about the DIA reading:

“Let’s see: on November 9th I turned 65, which, what with Medicare and Social Security, places me firmly over the hill in Senior Citizen land.  Turning 50 or 60 didn’t get to me, but this one rather does: such a sense of all that is gone and won’t come back: nothing necessarily admirable to covet — the way I looked in spring of 1957 perhaps.  How old was I?  Thirty-three?  Yes.  And years when I might have written more poems and didn’t.  On the other hand, Vincent Virga writes me that at the reading for the Dia Foundation on the 15th, I looked, ‘Kingly.  Magnificent.  A true star.’  So what the hell (if I looked at all that way, it was the lighting for the videotaping).  Nevertheless: what the hell!  Past is indeed past, and being 33 was less than no fun at all: being 65 is.  Rather fun, I mean.”

Schuyler may have dreaded it for months, but soon after the reading, he reported in a letter to his friend Anne Dunn: “As for my moment in the spotlight — well, truth to tell, I was a fucking sensation.”  Surely he was right.  Kingly, magnificent, a true star. And now we can all see for ourselves.

*Update: I should have mentioned that there is one other video recording of Schuyler readily available on PennSound — a slightly later reading Schuyler gave at the San Francisco Art Institute on Feburary 10, 1989, where he was introduced by Bill Berkson.  This new reading can now be found on PennSound’s Schuyler page as well.