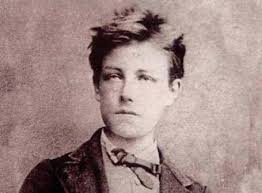 In a new interview at the Brooklyn Rail with Jarrett Earnest, John Ashbery speaks candidly about an early, formative experience that I don’t recall seeing him ever mention before.

When Jarrett says “a lot of people resort to poetry when they are in love, or are upset. I wonder how falling in love affected your poetry, or your relationship to language?” Ashbery divulges some personal details about his first love.  He explains that the older boy he fell for when he was 16 was the one who actually introduced Ashbery to the work of Arthur Rimbaud — the French poet who would become an important influence on his work and whose poetry Ashbery would go on to translate so memorably and wonderfully:

Ashbery: Actually, my first love was the summer I was sixteen with a boy a year older from Massachusetts who was working on a farm nearby. He was the one who first told me about Rimbaud.

Ashbery: He had read him. And he showed me the short poem, Ô saisons, ô châteaux, / Quelle âme est sans défauts?—which I thought was the most beautiful thing I’d ever read. I think I had already begun to write poetry when I first met him, but that opened a more intriguing way of poetry. My early poems are really embarrassing now and he was very kind about them but obviously he didn’t think they were worth much, offering genial criticism. And he also knew the poet Robert Francis, who was like sort of like Robert Frost—younger and lesser known—who lived in Amherst, near my friend.

Rail: Did you have a dramatic parting?

Ashbery: He went home to Amherst and I was going to Deerfield that September for my first year, and after he left I felt very guilty about having done all this and I stopped replying to his letters. He was very upset.

There’s something sweet and moving about this revelation — the notion that the 16-year old Ashbery fell in love for the first time and discovered Rimbaud simultaneously . As Jarrett says, the experience “must have cemented your relationship to both French and poetry.”

The interview is full of good stuff, including discussion of the youthful Ashbery’s diary (which he wrote in French to avoid having his mother learn of his crushes on boys), his experience as an art critic, his long-term relationship with David Kermani, and many other topics.  You can read it here.

This entry was posted in Arthur Rimbaud, French poetry, Influences on the NY School, Interview, John Ashbery, Translation, Uncategorized. Bookmark the permalink.
%d bloggers like this: