Today is of course Bloomsday — the international celebration of James Joyce’s Ulysses — and a year ago I posted about Frank O’Hara’s passionate attachment to Joyce and his epic novel.  This year, I thought I’d post another example of the powerful influence Joyce had on the poets of the New York School — a wonderful passage from James Schuyler’s amazing long poem “The Morning of the Poem,” about his own formative experience with Ulysses.

Schuyler recalls a high school teacher, Mr. Luther Smeltzer, who first introduced him to literature, and remembers the time Smeltzer mentioned an intriguing book whose narrative was based on Homer and which used stream of consciousness, which prompted the young Schuyler to go out and buy the book.  He had to hide the true nature of the notoriously “filthy” book from his cruel, conservative step-father, but also found reading such smutty, contraband material caught the attention, and grudging admiration, of a football player at school.

As you can see below, the passage also features an amusing memory in which John Ashbery confides, to Schuyler’s amazement, that he actually dislikes Joyce’s work. Schuyler responds:  “I / didn’t know you were allowed not to like James / Joyce.  The book I suppose is a masterpiece: freedom of choice / is better.” 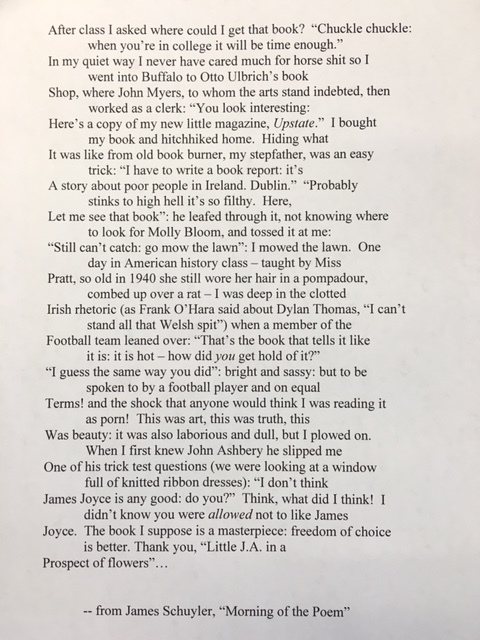