James Schuyler as a Portrait of … Fatherhood?

Because it was Father’s Day yesterday, the cover of a recently published anthology called Stories of Fatherhood (Everyman’s Pocket Classics, 2014) popped up in my feed, and I was immediately struck by the image on the cover and did a double-take.  Here it is: 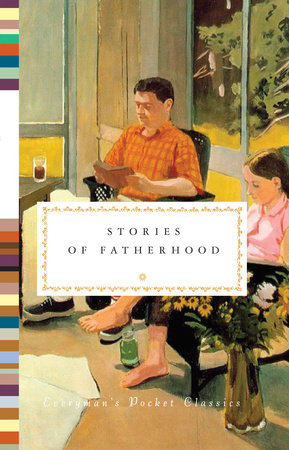 What a fitting image for such a book — a beautiful, heartwarming picture of a dad reading alongside his daughter on a sunny porch!

Except this is hardly a depiction of paternal love and father-daughter bonding at all. As fans of the painter Fairfield Porter or the poet James Schuyler would likely know, this painting — a 1966 work by Porter called Iced Coffee — actually depicts Schuyler on the porch of Porter’s house in Maine sitting beside Porter’s daughter Elizabeth.

In other words, the man in the painting is not a father and the girl is not his daughter.

Schuyler, who was gay, never had any children.  Furthermore, he played an unusual role in the Porter household: subject to lifelong bouts of mental illness, Schuyler was taken in by and cared for by the Porters.  As Porter’s long-suffering wife Anne memorably put it, Schuyler “came to lunch one day and stayed for eleven years.”  Although Schuyler did become a de facto member of the family, and was quite close with the Porter children, he is not, as the cover seems to suggest, the father of the girl in the painting.

To further complicate matters, as Justin Spring’s excellent 2000 biography of Porter, Fairfield Porter: A Life in Art, revealed for the first time, Porter and Schuyler actually carried on an intermittent, clandestine sexual relationship, despite the outwardly conventional, heterosexual domestic life Porter lived as a husband and father.

Which means that the painting not only depicts a man who is not the girl’s father, the man it presents was also secretly sleeping with her actual father.

It is a lovely painting, to be sure, and the anthology seems to include stories about how “paternal bonds are forged outside biology” too.  But I really doubt that’s what the book’s designers were thinking when they chose this painting; rather, it seems like they reached for an attractive stock image of a father and daughter reading together.

Which is why I find it pretty ironic and hilarious that someone at Penguin/Random House (which publishes the Everyman series) thought this painting was a good image to use for an anthology called Stories of Fatherhood.

This entry was posted in Fairfield Porter, James Schuyler, Uncategorized, Visual Art. Bookmark the permalink.
%d bloggers like this: