Ron Padgett talks about his Sundays with the New York Times 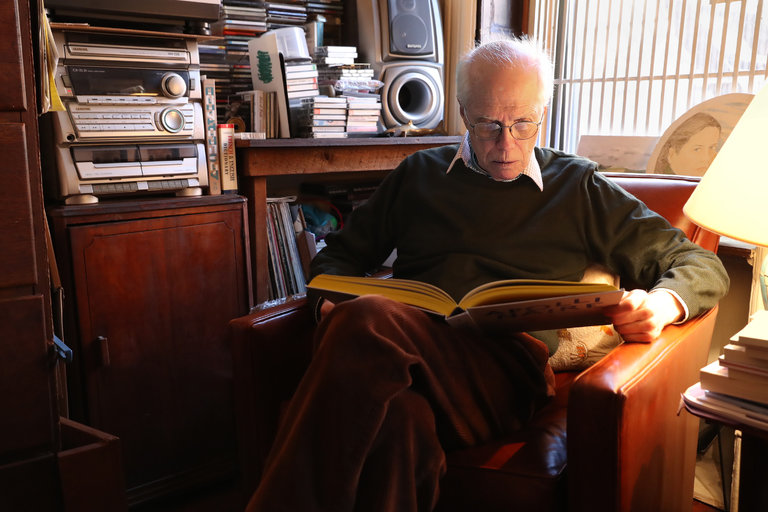 The New York Times has just posted a little feature on Ron Padgett, in conjunction with Jim Jarmusch’s new movie Paterson.  As I noted recently, Padgett collaborated with his friend Jarmusch, composing poems for the movie:

For the movie “Paterson,” about a poet named Paterson who lives in Paterson, N.J., the director Jim Jarmusch asked his old friend Ron Padgett, a poet from Oklahoma who lives in the East Village, for a few poems. Both men had studied poetry with Kenneth Koch at Columbia College, although not at the same time. Mr. Padgett, 74, who wrote three poems and provided four old ones for the movie’s main character, said the words flowed easily. “I realized I’ve been writing poems as one character or another for more than 50 years,” he said.

The piece provides us with some charming little glimpses into Padgett’s everyday life in New York, as he discusses his daily routine — for example, we learn that he likes to have “a cup of jasmine tea and a slice of toast,” watch “Judge Judy” and “Wheel of Fortune,” and eat dinner at 6:00 sharp, as he always did growing up in Tulsa.

He also reflects on how his East Village neighborhood has changed over the course of the 50 years he has lived in the same apartment:

I don’t really mind that N.Y.U. kids and investment bankers have taken it over. That’s New York. Neighborhoods change. I’ve been here 50 years. It’s a lot safer, it’s a lot quieter, it’s a lot cleaner, and it’s a lot more boring, too. It’s a trade-off. To hear gunfire outside was not that uncommon. I’m glad those days are gone.

You can check out the rest here.