Look What They’ve Done to The San Remo 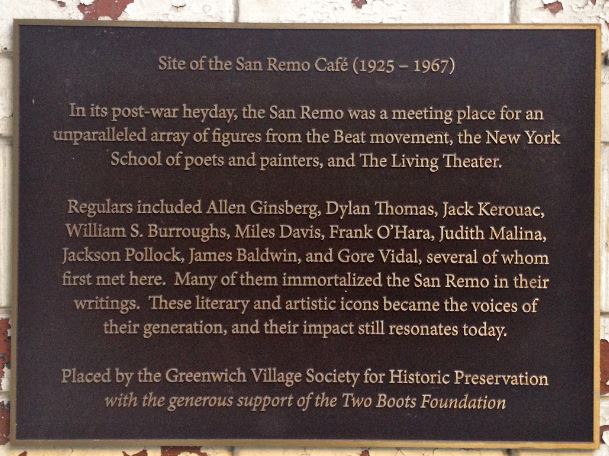 There is no shortage of opportunities to feel nostalgic for the good old days when rents were cheap, bars were smoky and filled with intellectual chatter, Kafka was the rage, and New York was a haven for rebellious artists.  Nor do you have to work very hard to get depressed about how expensive and antiseptic the city has become.  I’ve even written about this feeling before from time to time, but this piece in the New York Post about the re-boot of the old San Remo Cafe is particularly nauseating.

In the 1950s and 1960s, the San Remo — on MacDougal and Bleecker, in the very heart of Greenwich Village — was one of the most important and romanticized literary hangouts for the bohemian set.  The young New York School poets met there to drink and socialize, and Jack Kerouac used the San Remo as a central setting (rechristened as “The Black Mask”) for The Subterraneans, his speed-fueled 1953 novel about the underground scene.

In an essay, Frank O’Hara recalled the bar’s importance to early days of the New York School of poets:

We were all in our early twenties.  John Ashbery, Barbara Guest, Kenneth Koch and I, being poets, divided our time between the literary bar, the San Remo, and the artists’ bar, the Cedar Tavern.  In the San Remo we argued and gossiped: in the Cedar we often wrote poems while listening to the painters argue and gossip.  So far as I know nobody painted in the San Remo while they listened to the writers argue.

In one poem, O’Hara reminisces about a typical night of carousing at the bar with John Ashbery: “I remember JA / staggering over to me in the San Remo and murmuring / ‘I’ve met someone MARVELLOUS!'”

The NY Post article, titled “Where Models and Tech Billionaires Party to Avoid New Yorkers,” describes the new bar — which is in a different location in the Village, on Lafayette St. — as a playground for the obnoxiously wealthy.  It is also awkwardly trying to use the aura of the old haunt to promote itself:

San Remo Cafe is named after the Greenwich Village watering hole that was frequented by legions of creative types such as Jack Kerouac, Miles Davis and Tennessee Williams.

Its newest iteration, which had a soft opening last Friday, pays homage to the original cafe, which shuttered in 1967. During the day, its storefront coffee shop is open to the public, serving $3.50 espressos under globe lights.

The backroom bar, which opens after 7 p.m., features a retro décor of corrugated mirrors, lacquered tables and moss-green couches, and is now home to yuppies and downtown scenester types.

During opening night, Katya Taran, a svelte Russian model wearing a see-through turtleneck, ripped jeans and YSL bag, uploads a photo of herself on Instagram, praising the new space with a caption, “‘Hip without being slick, intelligent without being corny,’ Jack Kerouac put it best.”

Hmmm…. In his memoir about Frank O’Hara, Joe LeSueur recalls the San Remo as “a dark, smoky, cramped establishment with a big espresso machine, loud jukebox, and crowded tables, whose patrons — seedy literary types, grubby bohemians, quiescent queers who shunned screaming gay bars — mainly drank fifteen-cent glasses of tasteless draft beer.”  It doesn’t sound like one would find too many starving artists and impoverished writers arguing about The Cantos or Gertrude Stein there these days.

Sitting with the cool cats, though, can be costly: A table at San Remo’s has a bar-tab minimum of $5,000. Menu items include a $2,800 bottle of Champagne Salon and a $1,275 bucket containing Johnnie Walker Blue Label and mixers.

“You have to know someone to get in,” Sean Nasiri, a partner at the bar, says. “You won’t know about [the place] unless we want you to.”

Non-bottle spenders make their way to the granite bar at the end of the room, which offers $16 cocktails like Bashful and Green, containing green-tea vodka and Caribbean sweet syrup, as well as La Traviata, a blend of prosecco and grapefruit…

“Everyone’s so well-dressed, and it’s supertrendy,” says 24-year-old stylist Shalimar Ortiz, who’s based in the West Village. “I’ve finally found a great place to be among people like me.”

Oh for the days of “seedy literary types,” “grubby bohemians,” and fifteen-cent glasses of tasteless beer!  But as O’Hara puts it rather cryptically at the end of his 1954 poem “On the Way to the San Remo”: