Ever since I started doing this blog (back in 2013), it’s been a challenge for me to just keep up with the steady stream of New York School-related news and happenings. (It doesn’t help that this doesn’t actually count as “real” work and I do it entirely by myself).  Lately I’ve found it easier to post more on the “Locus Solus” Facebook page and my own Twitter account rather than on this site, so please follow me at either or both of these places if you don’t already to get timely updates and information and links about the poets and artists of the New York School.

But rather than let the flood of news go by unnoticed here, I’ve decided to post what I hope will be a semi-regular roundup of recent news and links  (I’ve done this a couple times before, but not lately).

So here are a few items (some several months old, some more recent) that might be of interest, but which I don’t have time to do a full post on right now:

— Barry Schwabsky has a great piece in the New York Review of Books about a collaboration between Frank O’Hara and the Italian artist Mario Schifano which, until now, had remained mostly unknown and forgotten, but has recently been published in a limited-edition volume, with a wonderful, detailed essay by Raphael Rubinstein, among others.

— Sandra Simonds has posted an interesting piece about John Ashbery’s Girls on the Run at Jacket2, arguing that “Ashbery’s book is about the affective, textual, emotional, and psychological frames of childhood,” and offering a reading of the political dimensions of Ashbery’s long poem.

— In this piece, Charles Bernstein explores the differences between two different obituaries that the New York Times ran for John Ashbery last August, in Postmodern Culture.

— Just after Ashbery’s death, the second volume of the Library of America’s collection of Ashbery’s work appeared:  Collected Poems 1991–2000.  The Economist reviewed the book here.

— In December, the Library of America posted an interview with the volume’s editor, Mark Ford, in which he “describes some of the revelations he encountered while editing the book, and explains what makes this phase of Ashbery’s long career so distinctive.”

— In their end-of-the-year tribute to people who died in 2017, the New York Times published a photo of Ashbery’s beloved collage-making desk, along with this great comment by David Kermani, Ashbery’s husband:

“He has been collecting collage material since he was in college. In a sense, it’s how he writes a poem: using fragments of conversation or something he heard on TV, juxtaposing things and creating environments. Collage is central to his process. It was very much trial and error. You can’t really describe what his collages are specifically about, but they deal with the process and language itself. He was, perhaps, communicating the feeling of creativity.” 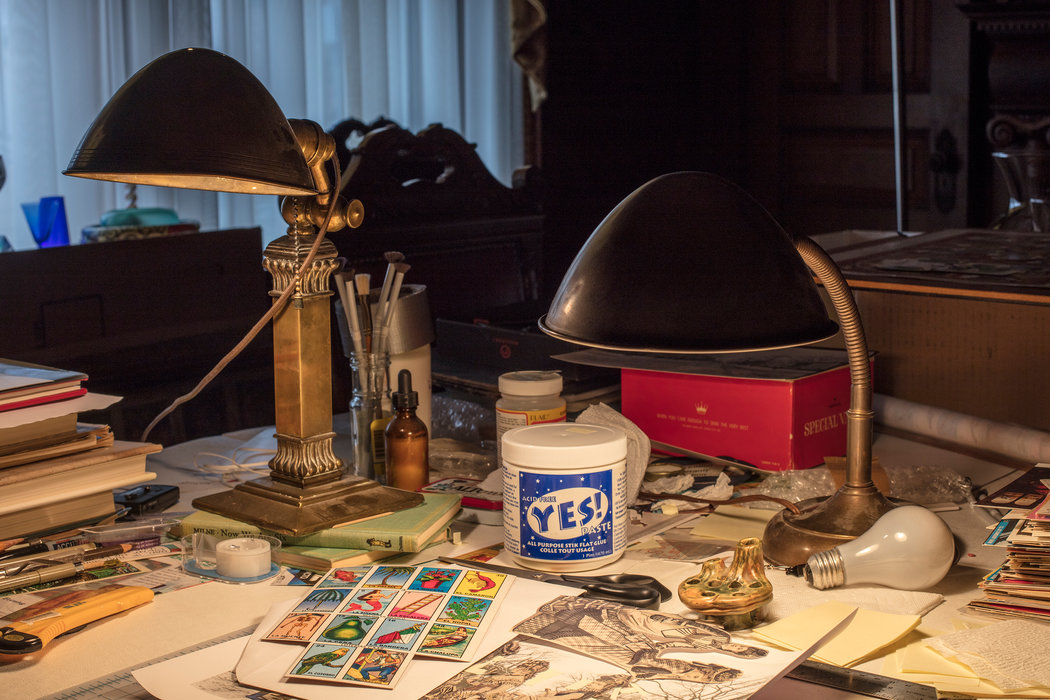 — The poet and critic Stephen Paul Miller wrote a piece for Publishers Weekly reflecting on Ashbery’s passing and on the strange experience of finding himself mentioned in one of the obituaries for the poet in the context of what Ashbery felt were “ludicrous interpretations of his poetry.”  Miller writes about his own friendly encounters with Ashbery and their disagreement about Miller’s reading of his work, and writes that “I was embarrassed about my infamous mention, but felt honored to be a footnote in the obituary of the poet I admired most. ‘At least,’ one of my students told me, ‘you made it into the New Yorker.'”

— In a New York Times piece about the much-discussed and extremely popular “Instagram poet” Rupi Kaur, the critic Carl Wilson discusses Kaur in relation to John Ashbery, and discusses the impact of Ashbery’s death, among other things: “John Ashbery’s death in September gave my world a lurch, as the 90-year-old eminent American experimentalist was my favorite living poet. But the compensation was to discover how many others felt the same way …On social media, people posted their favorite Ashbery poems and passages…”

— Matthew Bevis’s long essay for Poetry magazine about poetry and distraction (a subject very close to my heart!) centers on a discussion of Ashbery’s work.

— Daniel Kane recently published a terrific new book (which I’ve mentioned before) about the connections between the New York School and punk music, called Do You Have a Band? Poetry and Punk Rock in New York City.

— Josh Schneiderman wrote a great review of Kane’s book for Public Books, calling it “a pioneering work of literary history that chronicles a period from roughly the mid-1960s to the mid-1980s when the line between poetry and Manhattan-based proto-punk and punk rock was markedly permeable.”

— Franz Nicolay, who some might remember as the former keyboardist for the indie band The Hold Steady, reviewed Kane’s book alongside two other books about music for the Los Angeles Review of Books, noting that Kane “persuasively argues the crucial influence of poetry on New York art-rock and proto-punk from the 1960s through the 1980s.”

— For more on Kane’s book and on New York School poetry and punk, check out the rich and far-ranging interview Kane did with Andy Fitch for the Los Angeles Review of Books.

— The Paris Review posted a conversation between Eileen Myles and Jeremy Sigler, focused on the pair’s visit to the Tibor de Nagy Gallery to see a Larry Rivers exhibit and, especially, to see Rivers’s famous 1954 painting “O’Hara Nude with Boots.”

— In McSweeney’s, Liam O’Brien published a funny (but not only funny, and rather affecting) pastiche of Frank O’Hara’s beloved poem “Steps” called “Frank O’Hara, Updated for 2017.”

— At the Paris Review, Jeff Dolven ruminates on a sentence from John Ashbery’s poem “Soonest Mended” as part of an eight-part series called Life Sentence, in which “Dolven takes apart and puts back together one beloved or bedeviling sentence.”

— Also, Dolven’s new book, Senses of Style: Poetry before Interpretation — which focuses on Sir Thomas Wyatt, Frank O’Hara, and the problem of style — has just appeared from the University of Chicago Press.  You can read more about it here.

— A major new Jasper Johns exhibit has opened at the Broad Museum in Los Angeles, featuring “Skin with Frank O’Hara Poem” and “In Memory of My Feelings” (a tribute to O’Hara) among many other works.  Deborah Solomon wrote about the show and Johns for the New York Times.

— Kynaston McShine, the influential curator at the Museum of Modern Art, who also had the distinction of having dated Frank O’Hara, his MoMA colleague, in the 1960s, passed away in January.

— The librettist John Latouche is the subject of a new biography by Howard Pollock.  This New York Times piece refers to him as a forgotten Broadway lyricist,” but while that may be true, LaTouche lives on in Frank O’Hara’s famous “A Step Away from Them”: “First / Bunny died, then John Latouche, then Jackson Pollock. But is the earth as full as life was full, of them?”

— At the Paris Review, the novelist Ann Beattie has written a tender memorial for her friend Harry Mathews, who passed away last year, on the occasion of his birthday, which was Valentine’s Day.