“For Will”: A Short Documentary about Robert Creeley and His Son 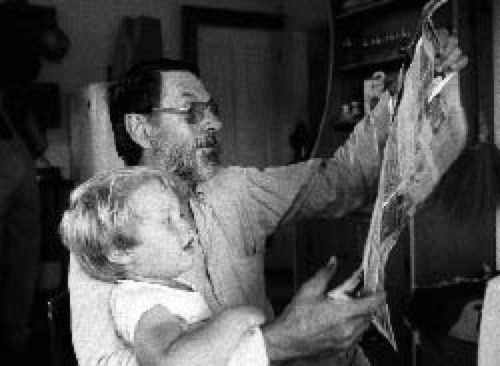 Robert Creeley and son Will (photo by Bruce Jackson)

A few years ago, I introduced the work of the poet Robert Creeley to an undergraduate student of mine at Florida State University named Grayson Goga.  Like so many students, Grayson fell for Creeley’s work — but unlike many students, he decided to make a film about Creeley.  For the final project for a documentary film course at FSU, Grayson tracked down the poet’s son, Will Creeley, travelled to his home to conduct an interview and film Will and his own young son and, along with some fellow students in the film program at FSU, made this moving short documentary.

The film focuses on Will’s memories of his father and his lasting legacy, as he reminisces about growing up in a world where Allen Ginsberg and other literary figures were his dad’s close friends.  It features Will reading a tender poem his father wrote for him, “Time (For Willy),” as well as another Creeley poem, “‘When I Heard the Learn’d Astronomer…,'” read first by Will and then by Creeley himself.

“For Will” is a touching, intimate tribute to a wonderful and influential poet.

And I’m definitely going to file this one under “Things that Make Me Very Happy to Be a Teacher.”

This entry was posted in Allen Ginsberg, Film, Robert Creeley. Bookmark the permalink.

5 Responses to “For Will”: A Short Documentary about Robert Creeley and His Son