48 years ago today, Frank O’Hara died in a tragic accident on Fire Island, New York.  Last year at this time, I wrote a post about the wealth of fine elegies for O’Hara that appeared following his death, by poets like Allen Ginsberg, James Schuyler, David Shapiro, Ron Padgett, and others.

Today, I thought I’d put up a copy of the obituary that ran in the New York Times on July 26, 1966, a document that is not so readily available.  As I always point out to my students, the headline tells you quite a bit about O’Hara’s reputation at the time of his death: “Frank O’Hara, 40, Museum Curator,” with the subheadline “Exhibitions Aide at Modern Art Dies — Also a Poet.”

“Also a poet” indeed.  Although it may be hard to believe now, at the time of his sudden death, O’Hara was better known as an art-world figure than a poet.  The obituary discusses his work on the painter Robert Motherwell and the controversy over Larry Rivers’s nude portrait of O’Hara, before turning to mention his poetry. (It also says he was “struck by a taxicab,” which was not in fact the case — he was run over by a dune buggy driven illegally on the beach by a young guy on a date).

Two days later, the New York Times also covered O’Hara’s funeral in an article entitled “200 Pay Tribute to Frank O’Hara.” Among other things, the piece discusses Larry Rivers’s famously shocking and graphic eulogy and John Ashbery’s moving recitation of “To the Harbormaster,” while managing to misspell the names of John Ashbery, Edwin Denby, and David Shapiro.

The opening pages of Brad Gooch’s City Poet: The Life and Times of Frank O’Hara feature a detailed description of the funeral, and also mention that an early edition of this New York Times article (which I recall I once had a copy of, but now can’t locate) contained “a snide line” about the “many bearded, tieless friends of Mr. O’Hara.”  Tieless!

Lastly, here are some lines from O’Hara’s “Poem (And tomorrow morning at 8 o’clock in Spingfield, Massachussetts”):

When I die, don’t come, I wouldn’t want a leaf
to turn away from the sun — it loves it there.
There’s nothing so spiritual about being happy
but you can’t miss a day of it, because it doesn’t last.

So this is the devil’s dance? Well I was born to dance.
It’s a sacred duty, like being in love with an ape,
and eventually I’ll reach some great conclusion, like assumption,
when at last I meet exhaustion in these flowers, go straight up. 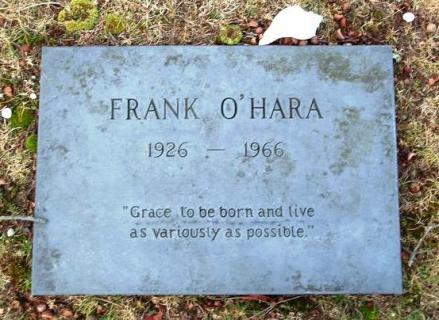