James Schuyler’s “February”: “It’s a day like any other” 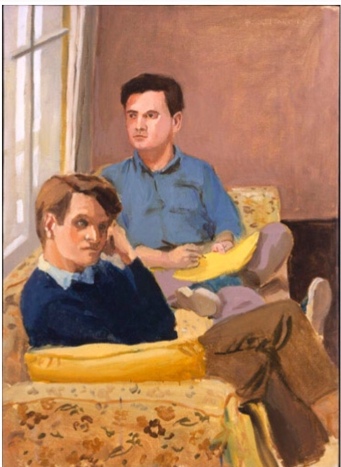 It’s February 28, and that means it’s a good day to read and think about one of my favorite James Schuyler poems, “February,” which takes place “on the day before March first.”

I’ve decided to post an excerpt from my recent book, Attention Equals Life, which discusses “February” in some detail.  I argue that this poem actually represents something of a turning point in Schuyler’s early work, encompassing a new embrace of the daily and ordinary that would become the signature concern of his poetry as a whole.

First, here is the poem in its entirety (you can also listen to Schuyler read the poem here):

February
A chimney, breathing a little smoke.
The sun, I can’t see
making a bit of pink
I can’t quite see in the blue.
The pink of five tulips
at five p.m. on the day before March first.
The green of the tulip stems and leaves
like something I can’t remember,
finding a jack-in-the-pulpit
a long time ago and far away.
Why it was December then
and the sun was on the sea
by the temples we’d gone to see.
One green wave moved in the violet sea
like the UN Building on big evenings,
green and wet
while the sky turns violet.
A few almond trees
had a few flowers, like a few snowflakes
out of the blue looking pink in the light.
A gray hush
in which the boxy trucks roll up Second Avenue
into the sky. They’re just
going over the hill.
The green leaves of the tulips on my desk
like grass light on flesh,
and a green-copper steeple
and streaks of cloud beginning to glow.
I can’t get over
how it all works in together
like a woman who just came to her window
and stands there filling it
jogging her baby in her arms.
She’s so far off. Is it the light
that makes the baby pink?
I can see the little fists
and the rocking-horse motion of her breasts.
It’s getting grayer and gold and chilly.
Two dog-size lions face each other
at the corners of a roof.
It’s the yellow dust inside the tulips.
It’s the shape of a tulip.
It’s the water in the drinking glass the tulips are in.
It’s a day like any other.

What follows is a passage that I’ve adapted from my chapter on Schuyler.  As a whole, the chapter explores the complex and moving poetics of everyday life at the center of his work.  (This excerpt can be found on pages 75 to 79 of Attention Equals Life):

The poet and critic Douglas Crase, a friend of Schuyler’s, once hinted at the seriousness of Schuyler’s investment in the quotidian when he recalled that “Jimmy was our own moralist of the everyday. He didn’t so much teach as exemplify, which is the way it should be, since even the wisest lessons sound like drivel.” What Schuyler exemplifies, the moral stance his poetry models, is how one can—as well as why one should—lead a life buoyed by an attentiveness to daily life. Although many writers turn to ordinary experience as vital subject matter for their writing, Schuyler goes further, consciously adopting the everyday as a central category and conceptual term for his thinking about art, as well as for his own poetry. “Daily life,” “the day,” “the everyday,” “the ordinary”—these are not just ideas critics can apply to Schuyler’s work after the fact but are also frequently recurring phrases, key words, and concepts that the poet himself uses overtly throughout his poems and his extensive body of art criticism.

… Schuyler seems to arrive at this commitment to the daily, this devotion to the “literal / and unsymbolic / day,” in one of his most important early poems, “February,” which catches the poet at the very moment of a conversion to an everyday-life aesthetic.  Written in 1954, the poem seems to have been a breakthrough for Schuyler, ushering in his mature style and set of concerns;  years later, he decided to give it pride of place as the second poem in Freely Espousing, his debut full-length collection, published in 1969.  (“February” was also one of only four poems by Schuyler included in The New American Poetry, the epochal 1960 anthology edited by Donald Allen, which ensured that it would become an early “greatest hit” for the poet).

“February” is one of the first of Schuyler’s many “window” poems; it sets out to recount exactly what could be seen from his apartment window in New York during a wintry sunset, at precisely 5 P.M. “on the day before March first.”  Fortunately for us, Schuyler discussed the composition of this poem in a letter he wrote (and apparently never mailed) to a woman (“Miss Batie”) who had written a fan letter to him about his poems.  In the letter, he explains that

the day on which I wrote the poem I had been trying to write a poem in a regular form about (I think) Palermo, the Palazzo Abatelli, which has splendid carved stone ropes around its doors and windows, and the chapels decorated by Serpotta, with clouds of plaster cherubs; the poem turned out laborious and flat, and looking out the window I saw that something marvelous was happening to the light, transforming everything.  It then occurred to me that this happened more often than not (a beautiful sunset I mean) and that it was ‘a day like any other,’ which I put down as a title.  The rest of poem popped out of its own accord.  Or so it seems now.  (Just the Thing 240)

By deciding to abandon the other, unwritten hymn to Palermo and Serpotta’s baroque cherubs, and by choosing to write “February” instead, Schuyler seems to have stumbled upon a recognition about subject matter, about attentiveness to daily life, and about form.

Schuyler describes a sudden decision to reject the “laborious and flat” exercise he had been working on, a poem in a traditional, inherited form that took for its subject an exotic location and a masterpiece of Western art (traits, clichés even, associated with the dominant, New Critical mode of mid-century verse).  Instead, he realizes a poem could be born simply from paying close attention to the present and immediate, to what was happening outside his window: an ordinary evening in New York City at sunset.  By doing so, Schuyler enacts the movement Emerson calls for in “The American Scholar” – he turns away from the remote and the antique, and toward the common, the low, and the familiar.  Suddenly aware that this kind of “marvelous” event happens “more often than not,” that it literally occurs every day, and that only our inattention obscures it from view, Schuyler discovers a new, more vital mode of writing, one highly attuned to what is happening right in front our noses, all the time.  In a way, the anecdote about the genesis of Schuyler’s “February” neatly recapitulates the emergence of the “New American Poetry” in the 1950s more broadly, which saw poets like Charles Olson, Robert Creeley, Jack Spicer, Allen Ginsberg, and Frank O’Hara rejecting what they saw as the stultifying, artificial conventions of mid-century poetry and embracing organic form, quotidian experience, and colloquial language.

Interestingly, the resulting poem itself serves as both the fruit of that recognition and a meta-commentary on it.  Defiantly spurning what he calls (in the letter to Batie) “regular form,” Schuyler instead writes a free verse poem in a colloquial voice, with enjambed lines, surprising line breaks, quick, associative leaps, and repetition (as in the last four lines), using precise and fresh images to notate how the speaker’s eye perceives the minute and shifting details of an ordinary dusk in Manhattan.  For example, he carefully recreates the way the pink of the tulips on the window-sill echoes the colors of the setting sun in the sky and building facades and vividly etches the gritty details of the urban scene.  At the same time, the poem allows the present to mingle with memories of the past – in particular, glimpses of the Mediterranean are interwoven with the Manhattan scene – in an associative fashion that is meant to mirror the way consciousness actually moves in daily life.

Then, in the middle of the poem, the speaker’s jaw drops open at the wonderful, accidental congruence of this contingent everyday moment: “I can’t get over / how it all works in together / like a woman who just came to her window / and stands there filling it / jogging a baby in her arms” (Collected 5).  Rather than dwelling, or concluding the poem, on this moment of insight or revelation, as many other poets might have done, the poem ends:

It’s getting grayer and gold and chilly.
Two dog-size lions face each other
at the corners of a roof.
It’s the yellow dust inside the tulips.
It’s the shape of the tulip.
It’s the water in the drinking glass the tulips are in.
It’s a day like any other. (5)

Schuyler deliberately leaves open what “it” is meant to refer to – is “it” the meaning of this specific everyday moment?  February?  Life?  Poetry?  The everyday?  While the reference remains loose and indeterminate, the passage, with its insistence underscored by repetition, makes a declaration about what is valuable, what is worth noticing, as it zooms in like a telephoto lens to see the dust inside the flowers and then pulls back to consider the entire, ordinary day in which all these things occur.  It also registers the mixture of repetition and variety in everyday life that will so fascinate Schuyler throughout his career.  Despite, or perhaps because of, all its richness and vitality, this day is, in the end just “like any other.”  The poem’s conclusion turns the everyday – and everydayness – into its central theme and subject, as well as an object of representation.

You can read the rest of my chapter on Schuyler and the everyday in my book, which you can find here and here.  (I also posted another excerpt from this chapter, on Schuyler’s poem “June 30, 1974” a while back).  For more on Schuyler’s “February,” check out this 2015 podcast discussion of the poem at PoemTalk (featuring Al Filreis, Julia Bloch, Erica Kaufman, and Bernadette Mayer).

4 Responses to James Schuyler’s “February”: “It’s a day like any other”